This is a Roman Catholic church under the auspices of the Order of St. Augustine. It is located in Intramuros, the historic walled city in Manila. The church was completed in 1607 and is the oldest stone church in the Philippines. It is one of four Filipino churches constructed during the Spanish Colonial Period to be designated an UNESCO World Heritage Site in 1993.

The present church is actually the third building to stand on this site, after the previous two were destroyed by fire. The Augustinians decided to rebuild the church in stone along with an adjacent monastery and construction started in 1586. Work was slow due to a lack of funds and materials but was operational by 1604. The church was officially declared complete on 19th January, 1607 and named ‘Church of St. Paul of Manila’.

During the Japanese Occupation in WWII, the church became a concentration camp. In the final days of the Battle of Manila, hundreds of residents of Intramuros and clergy were held hostage in the church by the Japanese with many of them being killed during the three week-long battle. At the end of the war the church was one of only seven Intramuros churches to survive a levelling by American and Filipino ground forces. The church itself suffered only damage to it’s roof, however the monastery was completely destroyed.  The monastery was rebuilt in 1970 as a museum. 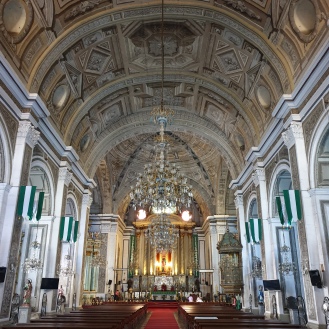